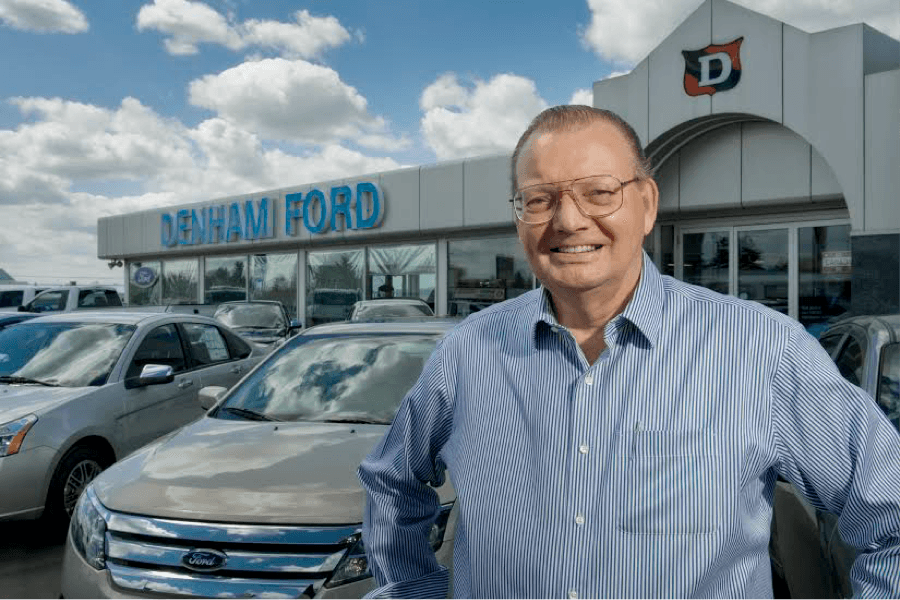 He was a man of his word, believing in the value of hard work, the importance of giving back to his community and helping his family members, friends and associates whenever needed. John thrived on working with his valued customers over the years and up until recently, rarely missed a Saturday selling cars. With his integrity, strong work ethic and passion for creating long lasting genuine connections, John built many successful businesses, most notably, Denham Ford - the most award-winning Ford Dealer in Canada.

John was born and raised on a farm in Porcupine Plain, Saskatchewan. As one of sixteen children, John learned responsibility and overcoming adversity at an early age. With six cents in his pocket, John left home at age 16 to seek employment in the Alberta oil industry.

John worked on drilling rigs in the Olds-Sundre area and developed a lifelong interest in the oil industry. Although John enjoyed working on the oilrigs, he desired to create a business of his own. In 1960, John purchased the Ford dealership in Wetaskiwin at age 22, making him the youngest Auto Dealer in Canada. From its humble beginnings, the dealership evolved into one of the most respected Ford retailers in all of Canada, serving the community for over 50 years and winning more Distinguished Achievement Awards, Chairman's Awards, North American Customer Excellence Awards, President's Awards and Diamond Awards than any other dealership in Canada, forty six awards in total. As a true entrepreneur, John's business portfolio has grown to include other dealerships, the hospitality industry and real estate ventures. Throughout his business life, John was truly appreciative of all of his employees in the organization.

John has always been very involved in his community. He spent many years as a director of the Wetaskiwin Chamber of Commerce. He was also elected by the members of the Chamber to serve as the President of the Chamber of Commerce. John spent twenty years as a member of the Kinsmen Club of Wetaskiwin, serving on many different committees and as the club's President. John spent ten years with the North American Snowmobile Racing Association and was Chairman of the Board for five years. John's companies have been sponsors of many community organizations such as hockey, baseball, 4H clubs, rodeos and regularly donated to many local charitable organizations.

John's hard work and leadership in the community was recognized by the local chapter of the Jaycees, who appointed him one of The Ten Most Outstanding Young Men in all of Alberta. Time Magazine awarded John their highly coveted Dealer of the Year Award for his dedication to his community, success in business, and involvement in the Motor Dealers Association of Alberta. One of the proudest moments for John came when the Wetaskiwin Chamber of Commerce named him Citizen of the Year for his outstanding contribution to his community.

John will be remembered as a role model and mentor to many, a business leader within the community and a loving husband, father and grandfather. John was greatly loved and will be missed by all the people whose lives he impacted.